It’s a challenge to summarize the AirVenture experience in the tiny space my dear editor has allotted me, but try I must. AirVenture is heart-racing. It’s invigorating. It’s highly entertaining, endlessly educational, tear-wiping inspiring, even good for a few laughs. But more than anything, it’s hard — an endurance contest which makes the Iditarod look like a stroll in a snowy park.

All of the little difficulties add up — damp shoes, crowded bathrooms, enormous walks, insufficient recharging stations. Despite the best efforts of the EAA and thousands of volunteers, it is a grueling challenge to get through AirVenture with some measure of mental health. A glass of scotch in the evening seems to help. All that said, I can’t wait to do it again.

Most campers stay only three or four days; I hung in for a week. Thursday seems to be “moving day” as many families depart, quickly replenished by a fresh team instantly recognizable by the bounce in their step and sunblock in their hands.

Strolling around the grounds, it’s easy to dwell on the glamour-girls. The A-10, F-22 and F-35 aerial displays were astounding and it’s wonderful to see my tax dollars finally being used for something worthwhile. The line-up of stalwart C-47s just back from the Normandy celebration was enormously impressive. There are P-51s scattered about like candy on Halloween and the B-29 Doc loomed large and shiny over Boeing Plaza.

Over in the vintage airplane section, I found a diminutive old girl I was not expecting: a Stinson Model A tri-motor airliner. I have about 30 hours in a single-engine Stinson, every one of them supremely memorable. I even found a few Stinson’s at the show. But never had I heard a whisper about the elegant Model A.

The Model A was the last of its kind: an eight-seat, imposingly-tall, sharp-edged bird pushed into extinction by the all-metal construction of the Boeing 247 and Douglas DC-2.  I chatted with the young pilot who had flown her from Texas. For an airplane designed with a slide-ruler and assembled with a sewing machine, he reported it flies beautifully. Visibility is great, speeds are good, reliability is excellent, and the plane features a number of clever innovations which made it popular with pilots and passengers, most noticeably a toilet. This plane is absolutely stunning.

Then there was the DC-3 rescued by Buffalo Airways on the TV show “Ice Pilots.” I had watched every one of those episodes and had no idea I would see the actual plane on the Oshkosh flight line, along with most of the team from Buffalo Airways. Welcome to America, all the McBryan clan and crew.

But, as every writer says of AirVenture, there’s more — so much more.

I’m not a big fan of “themes” for events, mostly because they’re invented by snarky marketing types trying to raise prices and scribble cloying press releases. But “Urban Air Mobility” is a meaningful concept. There was an entire pavilion devoted to aerospace innovation, electric airplanes, autonomous airplanes and all the other new technology, large and small. It was impressive.

Innovation means these folks are pioneers, exploring the unknown corners of aviation. These dark corners have been exposed by new capabilities, new electronics, new metallurgy and new software. To be sure, they’re putting wings on some pretty wacky-looking machines. Most of those ideas will never see the commercial light of day. But the future of aviation was a-birthing, someplace, in those tents. Walking among the displays, I felt like a tyrannosaur 65 million years ago, slamming my tail on the ground and dismissing the furry mammals around its feet. But who’s laughing now?

This was the 50th anniversary of the AirVenture show being based at Whittman Field. I spoke at some length with Bob Reese, the EAA AirVenture chief judge who also wrote the Official Judging Standards Manual. It was his 50th year judging planes and he justifiably received a special award for his lifetime of contributions to the event.

It also was “Women in Aviation” week. A giant United Airlines Boeing 787 arrived at Boeing Plaza to participate in the event, flown by an all-female crew. It was great fun to see thousands of ladies at the expo proudly and properly sporting Women in Aviation tee shirts. I wanted to snag one — I look great in purple — but my genome was rejected.

Speaking of women in aviation, while all of the airshow aerobatics were great, nobody, simply nobody, out-flies Patty Wagstaff and her Extra 300S. Her talent and energy simply take my breath away.

My unexpectedly favorite part of AirVenture was the Wednesday night air show with fireworks. It is awesome to see planes twinkling with flames on the backdrop of a pitch-black sky, glowing ballerinas strewing sinewaves of sparks through the night. Question for somebody: how do you deploy high-temperature magnesium flares on an airplane loaded with 100-octane aviation gas? The EAA won’t even let me smoke at my campsite.

On the 25th, a jumbo C-5 cargo plane delivered its own pyrotechnic airshow when it landed and the brakes burst into fire as the plane vacated the runway. Always a bunch of party-poopers, the airport emergency team promptly extinguished the fire but that’s the kind of adventure I don’t normally see at my local ’drome.

The End Is Near

Finally, I was done. I wanted to stay until the last gasp on the PA system and the final engine roared down the runway, but I couldn’t do anymore. I folded up my tent, loaded the plane, and the refueling truck broke beneath my wings. See what I mean? Oshkosh is hard, in ways you can never predict.

It took five burly men to push ’91N out of the ruts in the mud into which it had sunk over the week. As I taxied to Runway 27, I saw I was 21st in line for departure. The gods of Oshkosh saw my satisfaction and smote me. Their angels of aggravation, the orange-smocked marshals, grabbed a bunch of us and pushed us over to Runway 36. By actual count, 44 airplanes departed on that runway before my chance finally came.

Five hours and 66 gallons later my wheels kissed the tarmac in Pinehurst, NC. My mostly-sainted wife was happy to see me. The soggy laundry was exiled into the machine. A cold beer filled my hand. The lawn mower smiled, knowing I was going to pay for my absence with the extra growth from six inches of rain. Time to recharge and recoup, and start planning for AirVenture 2020. Let me see that long-range forecast… 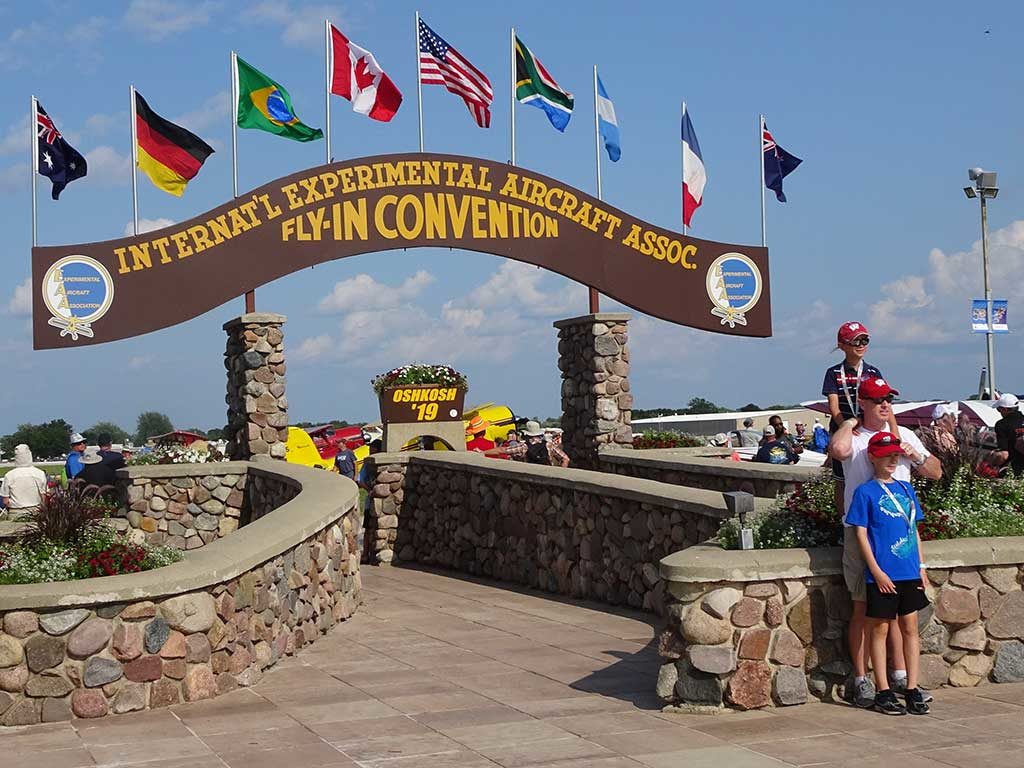 The AirVenture expo in Oshkosh, Wisconsin bills itself as the World’s Biggest Aviation Celebration. This year the show has taken some hits but over the… 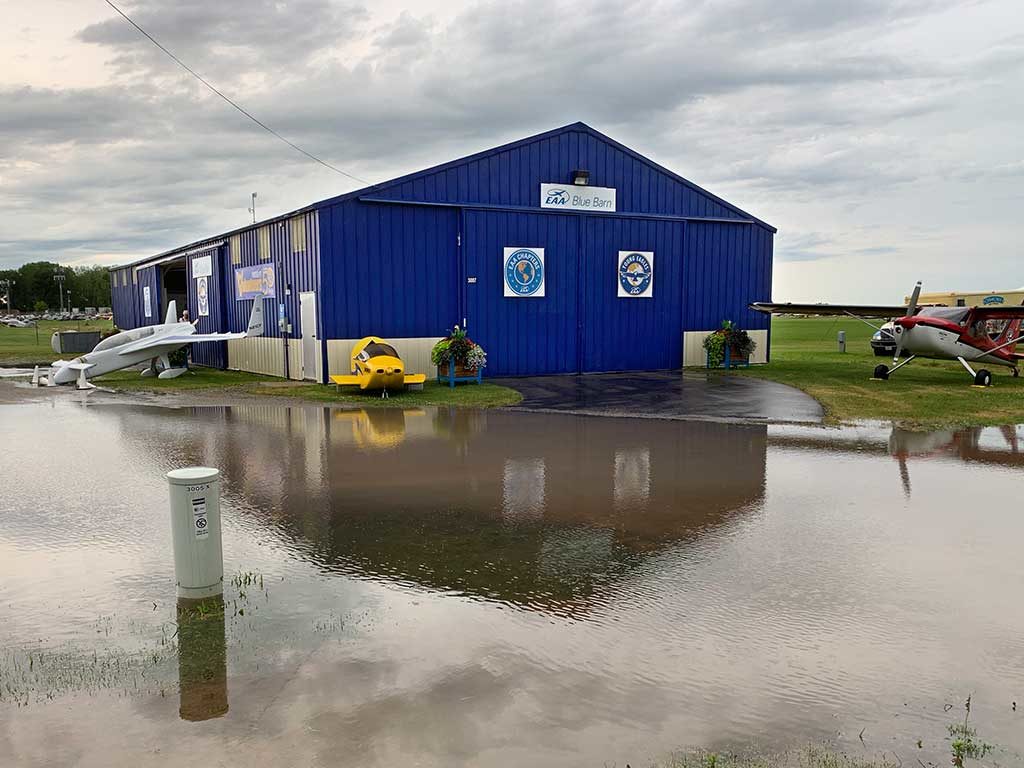 The AirVenture expo in Oshkosh, Wisconsin has opened a few hours ago. But this year will be different as four big thunderstorms have soaked the…